A Message from the Founder of Support the Blue Now: 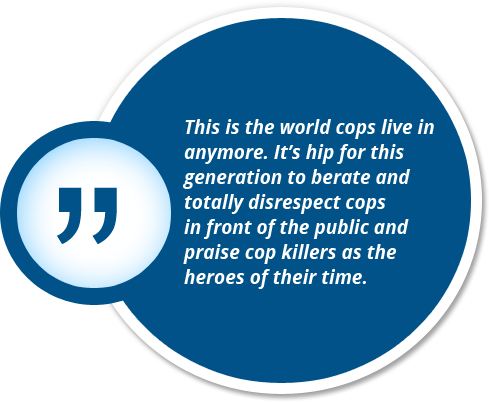 Hello my name is Bryan Nooner, founder of Support the Blue. Support the Blue is a non-profit organization that has a nationwide mission to Restore the Respect to our police officers.

I have been an entrepreneur and inventor for more than three decades. Now, I have turned my focus and resources toward social entrepreneurialship. I have been inspired to take action and do something about the ever growing lack of respect for our men and women in blue. It is apparent that the respect for our officers across the nation is deteriorating.

Currently men and women police officers across the nation are openly and publicly experiencing verbal, social and physical attacks by the very citizens they are sworn to protect and serve.

“Support the Blue Now” is an organization created to increase the public’s awareness of the tremendous value and positive influences that police officers provide to our society twenty four hours a day each and every day of the year.

Our Support the Blue team is working to bring about a national awareness of this serious societal problem that our officers face by creating innovative solutions as a way to bring about a positive change. We want to bring the silent majority together in order to “Restore the Respect” our officers deserve.

If you are not aware of the ongoing disrespect that has been occurring for the men and women in blue, I would ask you to please take a moment and simply review the overwhelming amount of incidences we have compiled on our website. We all need to recognize that there is an anti-police sentiment that is growing in our society today. It is a very difficult time to be in law enforcement. There is literally a war on police.

Many of the officers that I have spoken to feel as though they have a target on their back. Last October, Philadelphia Sgt. named Joe Leighthardt summed up what Police officers are feeling when he posted:

“This is the world cops live in anymore. It’s hip for this generation to berate and totally disrespect cops in front of the public and praise cop killers as the heroes of their time.”

Officers everywhere are experiencing more than just the disrespect of being told at restaurants and coffee houses that “We don’t serve cops here”. They are being shot at and killed just because they wear a uniform. Officers tell me they just want to go to work, do a good job and return home safely to their families. However, it’s getting increasingly hard to do once the uniform goes on because there is a target on their back.

It is easy for you to get involved and help make a difference. Support the Blue has developed a simple yet powerful way that you can help remind everyone that our officers are the first line of defense in almost every crisis. The Support the Blue Ribbon is a symbol of support and solidarity for our men and women in Blue.

Purchase the Support the Blue Ribbon and display them on your cars, house windows, coffee cups, phone cases, and computers. Hand them out in your neighborhood. Purchase and display these ribbons and show officers and our communities that we recognize and appreciate the risk they take everyday.

The funds from the sale of the Support Ribbons will go to fund a national public relations campaign, highlighting the positive effects police officers have on our communities.

Purchasing a ribbon has an amazing multiplying affect. By displaying the ribbon others begin recognizing that there is growing support for officers and they will be more likely to get a ribbon. The funds from the sale of the ribbon are then used to grow a positive and influential national PR campaign. Both the ribbon and the funds from the sale of the ribbons combine to create a synergistic affect designed to invigorate and inspire others including businesses, municipalities and community programs to more actively “Support the Blue”. Get involved, show your support, it’s easy to make a difference. I expect the Support the Blue Ribbon to become the nationally recognized symbol of support for our men and women in blue.

Thank You for Joining us, in the effort to Restore the Respect and… Support the Blue.

Lightweight ringspun jersey is perfect to showcase your brand message or artwork.

Lightweight ringspun jersey is perfect to showcase your brand message or artwork.